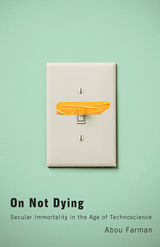 An ethnographic exploration of technoscientific immortality

Immortality has long been considered the domain of religion. But immortality projects have gained increasing legitimacy and power in the world of science and technology. With recent rapid advances in biology, nanotechnology, and artificial intelligence, secular immortalists hope for and work toward a future without death.

On Not Dying is an anthropological, historical, and philosophical exploration of immortality as a secular and scientific category. Based on an ethnography of immortalist communities—those who believe humans can extend their personal existence indefinitely through technological means—and an examination of other institutions involved at the end of life, Abou Farman argues that secular immortalism is an important site to explore the tensions inherent in secularism: how to accept death but extend life; knowing the future is open but your future is finite; that life has meaning but the universe is meaningless. As secularism denies a soul, an afterlife, and a cosmic purpose, conflicts arise around the relationship of mind and body, individual finitude and the infinity of time and the cosmos, and the purpose of life. Immortalism today, Farman argues, is shaped by these historical and culturally situated tensions. Immortalist projects go beyond extending life, confronting dualism and cosmic alienation by imagining (and producing) informatic selves separate from the biological body but connected to a cosmic unfolding.

On Not Dying interrogates the social implications of technoscientific immortalism and raises important political questions. Whose life will be extended? Will these technologies be available to all, or will they reproduce racial and geopolitical hierarchies? As human life on earth is threatened in the Anthropocene, why should life be extended, and what will that prolonged existence look like?

Abou Farman is assistant professor of anthropology at the New School for Social Research.

Preface: Realm of the Possible

Introduction: The Problems of Discontinuity and Indeterminacy in a Secular World

1. After Life: Varieties of Immortality in the Secular World

2. Immortalism: The History of a Futuristic Movement

3. Suspension: Stretching Time between the Finite and the Infinite

5. Convergence: Secular Solipsism and the Mind of the Cosmos

6. Progress and Despair: The Perverse Dialectics of Immortality as Techno-Civilizing Mission