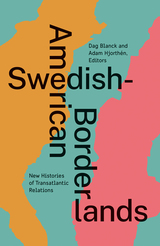 Reframing Swedish–American relations by focusing on contacts, crossings, and convergences beyond migration

Studies of Swedish American history and identity have largely been confined to separate disciplines, such as history, literature, or politics. In Swedish–American Borderlands, this collection edited by Dag Blanck and Adam Hjorthén seeks to reconceptualize and redefine the field of Swedish–American relations by reviewing more complex cultural, social, and economic exchanges and interactions that take a broader approach to the international relationship—ultimately offering an alternative way of studying the history of transatlantic relations.

Swedish–American Borderlands studies connections and contacts between Sweden and the United States from the seventeenth century to today, exploring how movements of people have informed the circulation of knowledge and ideas between the two countries. The volume brings together scholars from a wide range of disciplines within the humanities and social sciences to investigate multiple transcultural exchanges between Sweden and the United States. Rather than concentrating on one-way processes or specific national contexts, Swedish–American Borderlands adopts the concept of borderlands to examine contacts, crossings, and convergences between the nations, featuring specific case studies of topics like jazz, architecture, design, genealogy, and more.

By placing interactions, entanglements, and cross-border relations at the center of the analysis, Swedish–American Borderlands seeks to bridge disciplinary divides, joining a diverse set of scholars and scholarship in writing an innovative history of Swedish–American relations to produce new understandings of what we perceive as Swedish, American, and Swedish American.

Dag Blanck is professor of North American studies and director of the Swedish Institute for North American Studies at Uppsala University and director of the Swenson Swedish Immigration Research Center at Augustana College. He is author of The Creation of an Ethnic Identity: Being Swedish American in the Augustana Synod, 1860–1917 and recipient of the Carl Sandburg Medal from the Swedish-American Historical Society.

Adam Hjorthén is postdoctoral researcher at the Free University of Berlin and at Stockholm University. He received the Loubat Prize from the Royal Swedish Academy of Letters in 2018 and is author of Cross-Border Commemorations: Celebrating Swedish Settlement in America.

Part I. Across Waters and Lands

2. Borderlands and Lived Encounters: The Swedish Immigrant, Interiority, and Home

3. Imagining Borders and Heartland through Legend

6. Academics on the Move: The Nature and Significance of a Swedish-American Academic Borderland

7. The Role of Design in a Swedish-American Landscape

8. Borderlands in Another World: How Sweden Envisioned New Sweden, circa 1638–1702

12. A Postwar Italian Kitchen Shining in the Swedish-American Borderlands

15. History and Heritage in Bishop Hill, Illinois: Preservation, Representation, and Tourism in a Swedish-American Borderland