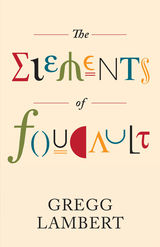 The history around the critical reception of Michel Foucault’s published writings is troubled, according to Gregg Lambert, especially in light of the controversy surrounding his late lectures on biopolitics and neoliberal governmentality. In this book, Lambert’s unique approach distills Foucault’s thought into its most basic components in order to more fully understand its method and its own immanent rules of construction.

The Elements of Foucault presents a critical study of Foucault’s concept of method from the earlier History of Sexuality, Volume 1, to his later lectures. Lambert breaks down Foucault’s post-1975 analysis of the idea of biopower into four elements: the method, the conceptual device (i.e., dispositif), the grid of intelligibility, and the notion of “milieu.” Taken together, these elements compose the diagram of Foucault’s early analysis and the emergence of the neoliberal political economy. Lambert further delves into how Foucault’s works have been used and misused over time, challenging the periodization of Foucault’s later thought in scholarship as well as the major and most influential readings of Foucault by other contemporary philosophers—in particular Gilles Deleuze and Giorgio Agamben.

The Elements of Foucault is the first generally accessible, yet rigorous and comprehensive, discussion of lectures and major published works of Foucault’s post-1975 theory of biopower and of the major innovation of the concept of dispositif. It is also the first critical work to address the important influence of French philosopher Georges Canghuilhem on Foucault’s thought.

Gregg Lambert is Dean’s Professor of Humanities at Syracuse University and Distinguished International Scholar at Kyung Hee University, South Korea. He is founding director of the Syracuse University Humanities Center and the Society for the Study of Biopolitical Futures. Lambert is author of thirteen books, most recently In Search of a New Image of Thought: Gilles Deleuze and Philosophical Expressionism and Philosophy after Friendship: Deleuze’s Conceptual Personae (both from Minnesota).

Article I. On “Foucault”

The Problem of “Rationalizing Power”

The Axiomatic Method of Analysis

The Rules of Immanence

“What is a Dispositif?”

The “Deployment” of Sexuality

“The Category of the Subject and its Functioning”

The Birth of the Cartesian Dispositif

Toward a Government of the Living

The Society of Control

The Problem of an “Inflationary Theory of the State”