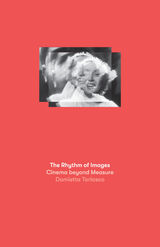 Focusing attention on a concept much neglected in the study of film, The Rhythm of Images opens new possibilities for thinking about expanded perception and idiosyncratic modes of being. Author Domietta Torlasco engages with both philosophy and cinema to elaborate a notion of rhythm in its pre-Socratic sense as a “manner of flowing”—a fugitive mode that privileges contingency and calls up the forgotten fluidity of forms. In asking what it would mean to take this rhythm as an ontological force in its own right, she creatively draws on thinkers such as Giorgio Agamben, Roland Barthes, Gilles Deleuze, and Luce Irigaray. Rhythm emerges here as a form that eludes measure, a key to redefining the relation between the aesthetic and the political, and thus a pivotal means of resistance to power.

Working with constellations of films and videos by international artists—from Michelangelo Antonioni, Jean-Luc Godard, and David Lynch to Harun Farocki and Victor Burgin, among others—Torlasco brings to bear on them her distinctive concept of rhythm with respect to four interrelated domains: life, labor, memory, and medium. With innovative readings of artworks and critical texts alike, The Rhythm of Images fashions a vibrant, provocative theory of rhythm as the excess or potential of perception.

Ultimately, the book reconceives the relation between rhythm and the world-making power of images. The result is a vision of cinema as a hybrid medium endowed with the capacity not only to reinvent corporeal boundaries but also to find new ways of living together.

Domietta Torlasco is a critical theorist, filmmaker, and associate professor in the Department of French and Italian and in the Comparative Literary Studies Program at Northwestern University. She is author of The Heretical Archive: Digital Memory at the End of Film (Minnesota, 2013) and The Time of the Crime: Phenomenology, Psychoanalysis, Italian Film. Her recent video essays screened at the Walker Art Center in Minneapolis and the Museum of Contemporary Art in Los Angeles.