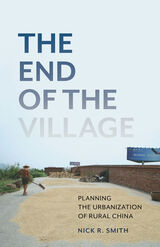 Since the beginning of the twenty-first century, China has vastly expanded its urbanization processes in an effort to reduce the inequalities between urban and rural areas. Centered on the mountainous region of Chongqing, which serves as an experimental site for the country’s new urban development policies, The End of the Village analyzes the radical expansion of urbanization and its consequences for China’s villagers. It reveals a fundamental rewriting of the nation’s social contract, as villages that once organized rural life and guaranteed rural livelihoods are replaced by an increasingly urbanized landscape dominated by state institutions.

Throughout this comprehensive study of China’s “urban–rural coordination” policy, Nick R. Smith traces the diminishing autonomy of the country’s rural populations and their subordination to larger urban networks and shared administrative structures. Outside Chongqing’s urban centers, competing forces are at work in reshaping the social, political, and spatial organization of its villages. While municipal planners and policy makers seek to extend state power structures beyond the boundaries of the city, village leaders and inhabitants try to maintain control over their communities’ uncertain futures through strategies such as collectivization, shareholding, real estate development, and migration.

As China seeks to rectify the development crises of previous decades through rapid urban growth, such drastic transformations threaten to displace existing ways of life for more than 600 million residents. Offering an unprecedented look at the country’s contentious shift in urban planning and policy, The End of the Village exposes the precarious future of rural life in China and suggests a critical reappraisal of how we think about urbanization.

1. Urbanization by Other Means: Planning under Urban–Rural Coordination

2. Village Growth Machine: Charismatic Authority and the Urbanization of the Party

3. Living on the Edge: Residents’ Urban–Rural Strategies of Survival

4. Coordinative Planning: Property, Politics, and Uncertainty at the Urban–Rural Edge

6. The End of the Village: Experiences of Displacement