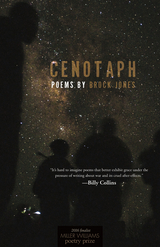 Out of the contradiction, paradox, loss, and strange beauty of contemporary warfare, Brock Jones brings us Cenotaph, a collection of poems that have as their genesis Jones’s deployments to Iraq in 2002 and 2005, when he was in the US Army.

These are war poems, but also love poems and hate poems, poems about dying and living, poems about hope and hopelessness. These are poems that beautifully reflect Jones’s resignation to and rejection of the impossibility of saying anything definitive or honest about war.

These are poems that strive to do what poet Bruce Weigl described as the poet’s job: to find “some kind of miraculous way th at if you work hard enough to get the words right, that which you call horrific and wrong is defeated.”

Cenotaph is a poet doing the poet’s work: trying, hoping to get the words right.