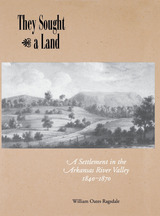 They Sought a Land, originally published in 1997, is the study of the rise and decline of a group of pioneers from the Carolinas who came to the Arkansas River Valley in the mid nineteenth century. Pisgah, as their settlement came to be known, drew five hundred pioneers from 1840 to 1870, forming a community bound by blood, friendship, and a strong Calvinist heritage.

Pisgah grew and prospered, developing increasingly successful farming practices, landholding patterns, and trading strategies. But the Civil War took a heavy toll, taking workers away from farms, subjecting those left on the home front to deprivation and violence, and creating division in the community. By 1870, the people of Pisgah had dispersed into Arkansas’s larger developing society.

Absorbing to read and rich with colorful detail, They Sought a Land is an important story of the westward expansion of the United States and the settling of the American South during the nineteenth century.
AUTHOR BIOGRAPHY
WILLIAM OATES RAGSDALE (1915–2005) was a resident of Russellville, Arkansas, and a descendant of members of the Pisgah community. He was a scholarly minister for forty years.
TABLE OF CONTENTS
Acknowledgements
Contents
Chapter 1: They Sought A Land
Chapter 2: The First Migrations, 1850-1852
Chapter 3: Building a Community, 1853-1855
Chapter 4: Economic Prosperity
Chapter 5: "Carolina" in Pope County
Chapter 6: Pisgah in the Civil War
Chapter 7: Pisgah Home Front in War and Reconstruction
Chapter 8: Rebuilding Pisgah
Notes
Sources
Index
REQUEST ACCESSIBLE FILE