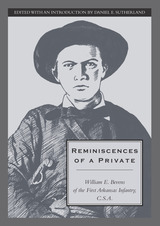 Reminiscences of a Private is William Bevens’s personal chronicle of his participation in such famous Civil War battles as Shiloh, Chickamauga, Atlanta, and Nashville. There is no supernal heroism here, no pretension, no grandiose analysis. Bevens is neither introspective nor philosophical, and he rarely dwells on the larger issues of the war. He concerns himself with what mattered to him as a common foot soldier. There are longer and fuller accounts of the war; however, few are as honest or as direct as this frank and forthright journal. By confining his contributions as editor to filling gaps in Bevens’s narrative, to correcting some misspellings, and to providing dates and explanatory notes, Daniel Sutherland allows Bevens to tell his story of a young Arkansan at war. His unassuming voice will speak to all readers with compelling candor.
TABLE OF CONTENTS
Contents
Introduction
Chapter One
Chapter Two
Chapter Three
Appendix
Bibliography
Index
REQUEST ACCESSIBLE FILE