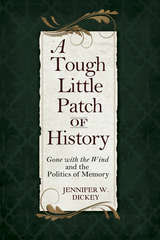 More than seventy-five years after its publication, Gone with the Wind remains thoroughly embedded in American culture. Margaret Mitchell’s novel and the film produced by David O. Selznick have melded with the broader forces of southern history, southern mythology, and marketing to become, and remain, a cultural phenomenon.

A Tough Little Patch of History (the phrase was coined by a journalist in 1996 to describe the Margaret Mitchell home after it was spared from destruction by fire) explores how Gone with the Wind has remained an important component of public memory in Atlanta through an analysis of museums and historic sites that focus on this famous work of fiction. Jennifer W. Dickey explores how the book and film threw a spotlight on Atlanta, which found itself simultaneously presented as an emblem of both the Old South and the New South. Exhibitions produced by the Atlanta History Center related to Gone with the Wind are explored, along with nearby Clayton County’s claim to fame as “the Home of Gone with the Wind,” a moniker bestowed on the county by Margaret Mitchell’s estate in 1969. There’s a recounting of the saga of “the Dump,” the tiny apartment in midtown Atlanta where Margaret Mitchell wrote the book, and how this place became a symbol for all that was right and all that was wrong with Mitchell’s writing.

AUTHOR BIOGRAPHY
Jennifer W. Dickey is assistant professor and coordinator, public history program, Kennesaw State University. She is the author of A History of the Berry Schools on the Mountain Campus and co-editor of Museums in a Global Context: National Identity, International Understanding.
TABLE OF CONTENTS
Contents
Acknowledgments
Introduction
Chapter 1: The Little Woman, the Big Book, and the City Too Busy to Hate
Chapter 2: Arousing an Interest in History
Chapter 3: The Rocky Road to Tara
Chapter 4: It Might Not Be Tara
Chapter 5: The House of Broken Dreams
Chapter 6: The House Shall Rise Again
Chapter 7: The Power of the Storyteller
Notes
Selected Bibliography
Index
REQUEST ACCESSIBLE FILE