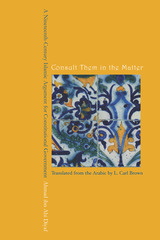 The 2005 winner of the The Arkansas Arabic Traslation Award, sponsored by the King Fahd Center for Middle East and Islamic Studies at the University of Arkansas and the University of Arkansas Press, though written in the nineteenth century, is a richly contextualized precursor of modern Muslim wrestlings with notions of democracy and constitutionalism. Translated by the distinguished Middle East historian L. Carl Brown, this important historical work is now available to English language readers for the first time. Toward the end of his long career as an official in the Tunisian government, Ahmad ibn Abi Diyaf (Bin Diyaf) took on the task of writing a history of his country. The result was a multivolume history, concentrating on the period that Bin Diyaf experienced first-hand from within the small circle of Tunisia’s government, where he had served from the 1820s to the 1860s. It was as if a Harry Hopkins, Arthur Schlesinger Jr., or Henry Kissinger had served not just a Roosevelt, Kennedy, or Nixon, but all three presidents for an unbroken forty-year period. Not only the most penetrating and most perceptive study of nineteenth-century Tunisian political life, Bin Diyaf’s history was illustrative of the activities and ideas in play throughout the larger Ottoman world. His work was a history with a thesis. Bin Diyaf sought to show the need for his country, and for that matter the larger Ottoman world, to adopt representative and responsive forms of government as existed in Europe. His purpose was most clearly set out in the Muqaddima or Introduction to his monumental work, which Brown has translated. The ideas produced in this text roughly a century and a half ago were not institutionalized, but they did catch hold as ideas and goals influencing later developments.
TABLE OF CONTENTS