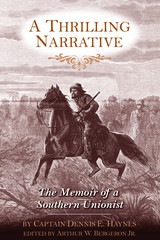 This Civil War memoir of Capt. Dennis E. Haynes is both unique and rare. Not only did few southern unionists write of their experiences after the war, Haynes’s is the only publication by a Louisiana unionist. Furthermore, it is the only account by a member of the First Louisiana Battalion Cavalry Scouts, a unit that existed for less than three months and saw its only real action during the Red River Campaign of 1864. Haynes’s memoir is a historic collection of his wartime experiences as a unionist in the Confederate South. Among his writings, Haynes describes how he opposed the secession of Texas and thus became a hunted man. He also tells of his harrowing odyssey to reach Union troops in Louisiana. Every step of the way, Haynes provides details, sometimes graphic, of the harassment and cruelty he and many others like him suffered at the hands of his Confederate neighbors.
AUTHOR BIOGRAPHY
Dennis E. Haynes organized a company of Southern Unionists in the spring of 1863. His narrative begins when he is appointed captain of this, the First Louisiana Battalion Cavalry Scouts. Following a distinguished civilian career as a district attorney and surveyor in New Orleans, Haynes disappears completely from public record in 1873.
TABLE OF CONTENTS