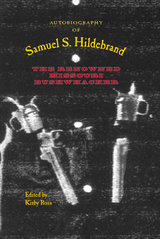 Most Civil War historians now agree that the guerrilla conflict shaped the entire war in significant ways. Some of these “bushwhackers”—Nathan Bedford Forrest, William Clarke Quantrill, John Singleton Mosby—have become quite infamous. Illiterate Sam Hildebrand, one of Missouri’s most notorious guerrillas—often compared to “Rob Roy,” and the subject of dime novels—was one of the few to survive the war and have his story taken down and published. Shortly after this he was killed in a barroom brawl. “I make no apology to mankind for my acts of retaliation; I make no whining appeal to the world for sympathy. I sought revenge and I found it; the key of hell was not suffered to rust in the lock while I was on the war path.” —Sam Hildebrand Hildebrand’s reign of terror gave the Union army fits and kept much of the Trans-Mississippi, especially Missouri, roiling in the 1860s. Over seven years of fighting he and his men killed dozens of soldiers and civilians, whites and blacks; he claimed to have killed nearly one hundred himself. He was accused of many heinous acts. The historical significance of Hildebrand’s story is substantial, but his bloody tale is eminently readable and stands quite well on its own as a cold-blooded portrait of a violent time in American history. Like the nightmarish and depraved world of the Kid in Cormac McCarthy’s novel Blood Meridian, Hildebrand’s world is truly ruthless and his story is brutally descriptive in its coolly detached rendering of one man’s personal war. Published in 1870, Hildebrand’s autobiography has long been out of print and has been a rare and highly prized acquisition among Civil War
AUTHOR BIOGRAPHY
Author/historian Kirby Ross is the recipient of a Kansas Governor’s Proclamation for his first book, The True Life Wild West Memoir of a Bush-popping Cow Waddy. He is a feature writer for the online magazine CivilWarStLouis.com and lives in Kirwin, Kansas.
TABLE OF CONTENTS