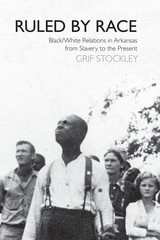 Winner of the 2010 Booker Worthen Literary Prize and the 2009 Ragsdale Award.

From the Civil War to Reconstruction, the Redeemer period, Jim Crow, and the modern civil rights era to the present, Ruled by Race describes the ways that race has been at the center of much of the state’s formation and image since its founding. Grif Stockley uses the work of published and unpublished historians and exhaustive primary source materials along with stories from authors as diverse as Maya Angelou and E. Lynn Harris to bring to life the voices of those who have both studied and lived the racial experience in Arkansas.

Topics range from the well-known Little Rock Central High Crisis of 1957 to lesser-known events such as the Elaine Race Massacres of 1919 and the shocking yet sadly commonplace attitudes found in newspaper reports and speeches. Through the words of the most powerful Arkansans such as racist Arkansas Govenor Jeff Davis (1901–1906) to the least powerful, including an unflinching look at the narratives of former slaves, readers will come away with increased awareness of the ways that race continues to affect where Arkansans live, send their children to school, work, travel, shop, spend leisure time, worship, and choose their friends and life partners.

AUTHOR BIOGRAPHY
Grif Stockley is the author of several books, including Race Relations in the Natural State; Daisy Bates: Civil Rights Crusader from Arkansas, winner of the Ragsdale Award from the Arkansas Historical Association and the Arkansiana Award from the Arkansas Library Association and Blood in Their Eyes: The Elaine Race Massacres of 1919, winner of the Booker Worthen Prize from the Central Arkansas Library System and recipient of a Certificate of Commendation from the American Association for State and Local History. He is a historian with the Butler Center for Arkansas Studies.
TABLE OF CONTENTS