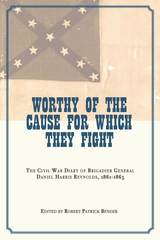 Worthy of the Cause for Which They Fight chronicles the experiences of a well-educated and articulate Confederate officer from Arkansas who witnessed the full evolution of the Civil War in the Trans-Mississippi Department and western theater. Daniel Harris Reynolds, a community leader with a thriving law practice in Chicot County, entered service in 1861 as a captain in command of Company A of the First Arkansas Mounted Rifles. Reynolds saw action at Wilson's Creek and Pea Ridge before the regiment was dismounted and transferred to the Army of Tennessee, the primary Confederate force in the western theater. As Reynolds fought through the battles of Chickamauga, Atlanta, Nashville, and Bentonville, he consistently kept a diary in which he described the harsh realities of battle, the shifting fortunes of war, and the personal and political conflicts that characterized and sometimes divided the soldiers. The result is a significant testimonial offering valuable insights into the nature of command from the company to brigade levels, expressed by a committed Southerner coming to grips with the realities of defeat and the ultimate demoralization of surrender.
AUTHOR BIOGRAPHY
Robert Patrick Bender is a history instructor at Eastern New Mexico University–Roswell. He is the author of Like Grass Before the Scythe: The Life and Death of Sgt. William Remmel, 121st New York Infantry.
TABLE OF CONTENTS
Contents
Series Editors’ Preface
Editor’s Preface
Acknowledgments
Introduction
One. 1861: Took Up the Line of March
Two. 1862: The Men Raised Such a Shout
Three. 1863: A Sad Thought for the Bravest of Us
Four. 1864: The Most Terrible Fighting I Have Seen during the War
Five. 1865: The War Is Over and We Failed
Appendix
Notes
Bibliography
Index
REQUEST ACCESSIBLE FILE