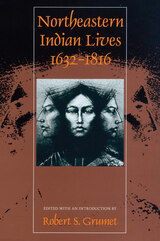 Northeastern Indian Lives, 1632-1816
edited by Robert S. Grumet
foreword by Anthony F. C. Wallace
University of Massachusetts Press, 1996
Paper: 978-1-55849-001-7
This collection of fifteen essays examines the lives of important but relatively unknown Native Americans. The chapters explore the complexities of Indian-colonial relations from the seventeenth to the early nineteenth centuries, from Maine to the Ohio valley. The volume is interdisciplinary, drawing on the methods and insights of social history, cultural anthropology, archaeology, and the study of material culture.

Few works have directed attention toward such lesser-known figures as Shickellamy, an Oneida diplomat; the Mohawk sachem Theyanoguin; Awashunkes, a Saconett sunksquaw; or Molly Ockett, a Pigwacket doctor. These individuals operated at the often dangerous and always uncertain interstices separating their world from that of the European settlers, as they worked for the security and survival of their peoples during the first centuries of contact. Their efforts helped shape events that determined the course of history in the colonial Northeast.
AUTHOR BIOGRAPHY
Robert S. Grumet is a staff member of the National Park Service's North-east Field Office in Philadelphia. His most recent publication is Historic Contact: Indians and Colonists in Today's Northeastern United States in the Sixteenth through Eighteenth Centuries.
REVIEWS
"This collection of 16 life histories seeks to 'redirect attention' to some 'all-but-forgotten' lives. . . . Each of these studies draws on research in local records, oral traditions, and new models of cultural interaction to tell their stories. . . . Some essays provide fascinating details of Indian-white relations. Others exhibit the strengths of new paradigms for expanding understanding of Native American responses."—Choice