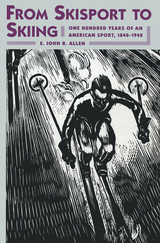 From Skisport to Skiing: One Hundred Years of an American Sport, 1840-1940
by E. John B. Allen and E. John B. Allen
University of Massachusetts Press, 1996
Paper: 978-1-55849-047-5
The first full-length study of skiing in the United States, this book traces the history of the sport from its utilitarian origins to its advent as a purely recreational and competitive activity.

During the mid-1800s, inhabitants of frontier mining communities in the Sierra and Rocky mountains used skis for many practical reasons, including mail and supply delivery, hunting, and railroad repair. In some towns skis were so common that, according to one California newspaper, "the ladies do nearly all their shopping and visiting on them."

But it was Norwegian immigrants in the Midwest, clinging to their homeland traditions, who first organized the skisport. Through the founding of local clubs and the National Ski Association, this ethnic group dominated American skiing until the 1930s.

At this time, a wave of German immigrants infused America with the ethos of what we today call Alpine skiing. This type of skiing became increasingly popular, especially in the East among wealthy collegians committed to the romantic pursuit of the "strenuous life." Ski clubs proliferated in towns and on college campuses and specialized resorts cropped up from New England to California. At the same time, skiing became mechanized with tows and lifts, and the blossoming equipment and fashion industries made a business of the sport.

On the eve of World War II, as the book concludes its story, all the elements were in place for the explosion in recreational and competitive skiing that erupted after 1945.
AUTHOR BIOGRAPHY
E. John B. Allen is professor of history at Plymouth State College.