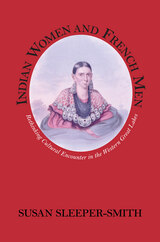 A center of the lucrative fur trade throughout the colonial period, the Great Lakes region was an important site of cultural as well as economic exchange between native and European peoples. In this well-researched study, Susan Sleeper-Smith focuses on an often overlooked aspect of these interactions—the role played by Indian women who married French traders.Drawing on a broad range of primary and secondary sources, she shows how these women used a variety of means to negotiate a middle ground between two disparate cultures. Many were converts to Catholicism who constructed elaborate mixed-blood kinship networks that paralleled those of native society, thus facilitating the integration of Indian and French values. By the mid-eighteenth century, native women had extended these kin linkages to fur trade communities throughout the Great Lakes, not only enhancing access to the region's highly prized pelts but also ensuring safe transport for other goods. Indian Women and French Men depicts the encounter of Old World and New as an extended process of indigenous adaptation and change rather than one of conflict and inevitable demise. By serving as brokers between those two worlds, Indian women who married French men helped connect the Great Lakes to a larger, expanding transatlantic economy while securing the survival of their own native culture. As such, Sleeper-Smith points out, their experiences illuminate those of other traditional cultures forced to adapt to market-motivated Europeans.
AUTHOR BIOGRAPHY
Susan Sleeper-Smith is associate professor of history at Michigan State University and coeditor of New Faces of the Fur Trade: Selected Papers of the Seventh North American Fur Trade Conference.