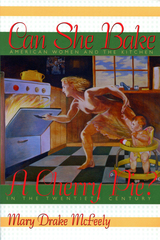 BUY
Can She Bake a Cherry Pie?: American Women and the Kitchen in the Twentieth Century
by Mary Drake McFeely
University of Massachusetts Press, 2001
Paper: 978-1-55849-333-9
In the rural America of the past, a woman's reputation was sometimes made by her cherry pie—or her chocolate layer cake, or her biscuits. As America modernized and as women left the home, entered the paid labor force, and battled their way to success in the professions, mastery of cooking remained an accepted sign that a woman took her gendered responsibilities seriously. Ironically, over the course of the twentieth century, as ready-made foods and kitchen appliances made home cooking less essential and labor-intensive, skill in the kitchen continued to be perceived not only by society but often by women themselves as a measure of a woman's true value.

This book shows how cooking developed and evolved during the twentieth century. From Fannie Farmer to Julia Child, new challenges arose to replace the old. Women found themselves still tied to the kitchen, but for different reasons and with the need to acquire new skills. Instead of simply providing sustenance for the family, they now had to master more complex cooking techniques, the knowledge of "ethnic" cuisines, the science of nutrition, the business of consumerism, and, perhaps most important of all, the art of keeping their husbands and children happy and healthy.
AUTHOR BIOGRAPHY
Mary Drake McFeely is an independent scholar. She is author of Lady Inspector: The Campaign for a Better Workplace, 1893–1921.