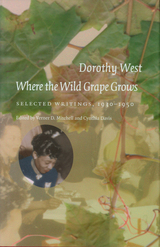 Despite her strong associations with Massachusetts—her upbringing in Roxbury, her lifelong connection with Martha's Vineyard, and two novels documenting the Great Migration and the rise and decline of Boston's African American community—Dorothy West (1907–1998) is perhaps best known as a member of the Harlem Renaissance. Between 1927 and 1947, West and her cousin, the poet Helene Johnson, lived in New York City where West attended Columbia University, worked as a welfare investigator, wrote for the WPA, traveled to Russia, and established a literary magazine for young black writers. During these years, West and Johnson knew virtually everyone in New York's artistic, intellectual, and political circles. Their friends included Langston Hughes, Zora Neale Hurston, Carl Van Vechten, Richard Wright, Arna Bontemps, Claude McKay, and many others. West moved easily between the bohemian milieu of her artistic soul mates and the bourgeois, respectable soirees of prominent social and political figures. In this book, Professors Mitchell and Davis provide a carefully researched profile of West and her circle that serves as an introduction to a well-edited, representative collection of her out-of-print, little-known, or unpublished writings, supplemented by many family photographs. The editors document West's "womanist" upbringing and her relationships with her mother, Rachel Benson West, and other strong-minded women, including her longtime companion Marian Minus. The volume includes examples of West's probing social criticism in the form of WPA essays and stories, as well as her interviews with Southern migrants. A centerpiece of the book is her unpublished novella, Where the Wild Grape Grows, which explores with grace and gentle irony the complex relationship of three retired women living on Martha's Vineyard. Several of West's exquisitely observed nature pieces, published over a span of twenty years in the Vineyard Gazette, are also reprinted.
AUTHOR BIOGRAPHY
DOROTHY WEST was born in Boston in 1907 and died on Martha's Vineyard in 1998. VERNER D. MITCHELL is assistant professor of English at the University of Memphis and editor of This Waiting for Love: Helene Johnson, Poet of the Harlem Renaissance (University of Massachusetts Press, 2000). CYNTHIA DAVIS is associate professor of English at Barry University.