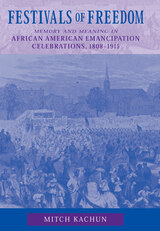 Festivals of Freedom: Memory and Meaning in African American Emancipation Celebrations, 1808-1915
by Mitch Kachun
University of Massachusetts Press, 2003
Paper: 978-1-55849-528-9
With the abolition of the transatlantic slave trade in 1808, many African Americans began calling for "a day of publick thanksgiving" to commemorate this important step toward freedom. During the ensuing century, black leaders built on this foundation and constructed a distinctive and vibrant tradition through their celebrations of the end of slavery in New York State, the British West Indies, and eventually the United States as a whole. In this revealing study, Mitch Kachun explores the multiple functions and contested meanings surrounding African American emancipation celebrations from the abolition of the slave trade to the fiftieth anniversary of U.S. emancipation.

Excluded from July Fourth and other American nationalist rituals for most of this period, black activists used these festivals of freedom to encourage community building and race uplift. Kachun demonstrates that, even as these annual rituals helped define African Americans as a people by fostering a sense of shared history, heritage, and identity, they were also sites of ambiguity and conflict. Freedom celebrations served as occasions for debate over black representations in the public sphere, struggles for group leadership, and contests over collective memory and its meaning.

Based on extensive research in African American newspapers and oration texts, this book retraces a vital if often overlooked tradition in African American political culture and addresses important issues about black participation in the public sphere. By illuminating the origins of black Americans' public commemorations, it also helps explain why there have been increasing calls in recent years to make the "Juneteenth" observance of emancipation an American—not just an African American—day of commemoration.