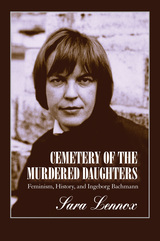 Although Austrian writer Ingeborg Bachmann (1926–1973) is widely regarded as one of the most important twentieth-century authors writing in German, her novels and stories have sometimes been viewed narrowly as portraits of women as victims. In this innovative study, Sara Lennox provides a much broader perspective on Bachmann's work, at the same time undertaking an experiment in feminist methodology.Lennox examines Bachmann's poetry and prose in historical context, arguing that the varied feminist interpretations of her writings are the result of shifts in theoretical emphases over a period of more than three decades. Lennox then places her own essays on Bachmann in similar perspective, showing how each piece reflects the historical moment in which it was written. Making use of recent interdisciplinary approaches—Foucauldian theories of sexuality, post-colonial theory, materialist feminism—she explores the extent to which each of her earlier readings was shaped by the methods employed, the questions asked, and the political issues that seemed most germane at the time. Out of this analysis comes a new understanding of the significance of Bachmann's work and new insight into the theory and practice of feminist criticism.
AUTHOR BIOGRAPHY
Sara Lennox is professor of German and Scandinavian studies and director of the Social Thought and Political Economy Program at the University of Massachusetts Amherst.
TABLE OF CONTENTS