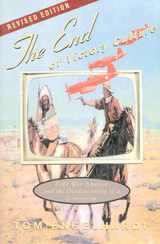 The End of Victory Culture: Cold War America and the Disillusioning of a Generation
by Tom Engelhardt
University of Massachusetts Press, 2007
Paper: 978-1-55849-586-9
In a substantial new afterword to his classic account of the collapse of American triumphalism in the wake of World War II, Tom Engelhardt carries that story into the twenty-first century. He explores how, in the aftermath of September 11, 2001, the younger George Bush headed for the Wild West (Osama bin Laden, "Wanted, Dead or Alive"); how his administration brought "victory culture" roaring back as part of its Global War on Terror and its rush to invade Saddam Husseins's Iraq; and how, from its "Mission Accomplished" moment on, its various stories of triumph crashed and burned in that land.
AUTHOR BIOGRAPHY
Tom Engelhardt, for fifteen years a senior editor at Pantheon, is now consulting editor at Metropolitan Books, a Fellow of the Nation Institute, and a Teaching Fellow at the Graduate School of Journalism, University of California, Berkeley. He is a regular book reviewer and essayist and is also creator and editor of the website Tomdispatch.com.
TABLE OF CONTENTS