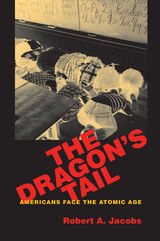 When President Harry Truman introduced the atomic bomb to the world in 1945, he described it as a God-given harnessing of “the basic power of the universe.” Six days later a New York Times editorial framed the dilemma of the new Atomic Age for its readers: “Here the long pilgrimage of man on Earth turns towards darkness or towards light.” American nuclear scientists, aware of the dangers their work involved, referred to one of their most critical experiments as “tickling the dragon’s tail.” Even after Hiroshima and Nagasaki, most Americans may not have been sure what an atomic bomb was or how it worked. But they did sense that it had fundamentally changed the future of the human race. In this book, Robert Jacobs analyzes the early impact of nuclear weapons on American culture and society. He does so by examining a broad range of stories, or “nuclear narratives,” that sought to come to grips with the implications of the bomb’s unprecedented and almost unimaginable power. Beginning with what he calls the “primary nuclear narrative,” which depicted atomic power as a critical agent of social change that would either destroy the world or transform it for the better, Jacobs explores a variety of common themes and images related to the destructive power of the bomb, the effects of radiation, and ways of surviving nuclear war. He looks at civil defense pamphlets, magazines, novels, and films to recover the stories the U.S. government told its citizens and soldiers as well as those presented in popular culture. According to Jacobs, this early period of Cold War nuclear culture—from 1945 to the banning of above-ground testing in 1963—was distinctive for two reasons: not only did atmospheric testing make Americans keenly aware of the presence of nuclear weapons in their lives, but radioactive fallout from the tests also made these weapons a serious threat to public health, separate from yet directly linked to the danger of nuclear war.
AUTHOR BIOGRAPHY
Robert A. Jacobs is research assistant professor, Hiroshima Peace Institute, Hiroshima City University.