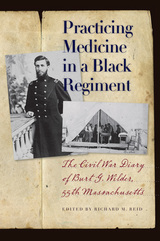 In early 1863, in the aftermath of Abraham Lincoln’s Emancipation Proclamation, Massachusetts began recruiting black soldiers to serve in the Civil War. Although the first regiment formed, the 54th Massachusetts, would become the best-known black regiment in the war, the second regiment raised, the 55th Massachusetts Volunteer Infantry, performed equally valuable service in the Union Army. Burt Green Wilder, a Boston-born, Harvard-educated doctor-in-training, was among the first white officers commissioned to staff the 55th Massachusetts. Like other officers serving in the state’s African American units, Wilder was selected for his military experience, his “firm Anti-Slavery principles,” and his faith in the value of black troops. From the time he joined the 55th in May 1863 until the regiment was discharged in September 1865, Wilder recorded his experiences and observations. He described the day-to-day activities of a Civil War surgeon, the indignities suffered by black enlisted men at the hands of a War Department that denied them the same treatment offered to white troops, and the role of the regiment in the campaign around Charleston and in Florida. Service in the southern states also allowed Wilder to indulge a passion for natural science and comparative anatomy, including the collection of unusual species, one of which—the spider known as Nephila wilderi—still bears his name. After the war he completed his medical studies at Harvard and joined the faculty of Cornell University, where he became a distinguished professor of zoology as well as an outspoken advocate of racial equality. In his introduction to the volume, Richard M. Reid analyzes Burt Wilder’s diary and places it within the context of the war, the experience of African American troops, and Wilder’s life and career.
AUTHOR BIOGRAPHY
Richard M. Reid is professor of history, University of Guelph, and author of Freedom for Themselves: Black North Carolina Soldiers and Their Families in the Civil War.