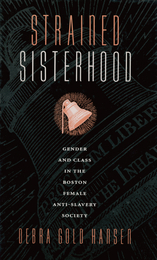 BUY
Strained Sisterhood: Gender and Class in the Boston Female Anti-Slavery Society
by Debra Gold Hansen
University of Massachusetts Press, 2009
Paper: 978-1-55849-763-4
Why do some feminists advocate male-female equality while others remain committed to gender difference? What are the sociocultural foundations of these seemingly opposing gender constructs and why has the American feminist movement failed to articulate an ideology that encompasses both?

Debra Gold Hansen explores the origins of the equality-versus-difference debate by examining the Boston Female Anti-Slavery Society, which disbanded in 1840 over this very issue. After establishing a historical framework for women's lives in early nineteenth-century Boston, Hansen analyzes the membership of the Society along the lines of race, religion, and socioeconomic status. Through her findings, she concludes that many of the issues that estranged female abolitionists in antebellum Boston continue to divide women today, testifying not to the strength of the bonds between women but to the fragility of those ties.
AUTHOR BIOGRAPHY
Debra Gold Hansen is a professor at the School of Library and Information Science, San Jose State University, Fullerton.