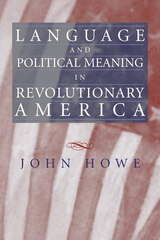 Language and Political Meaning in Revolutionary America
by John Howe
University of Massachusetts Press, 2009
Paper: 978-1-55849-765-8
Between the Declaration of Independence and the federal constitution, the American revolutionary generation produced an enormous body of writing on political matters. Using the written word as an instrument of political action, they articulated ideologies, negotiated conflicts, and charted the future of a new nation. In the process, John Howe argues, American writers effected a fundamental transformation in the nature and expressive purposes of political language. Turning away from earlier assumptions about the capacity of language to capture universal truths and contain human behavior, they fashioned a new discursive practice based on the recognition that the language of politics, far from being fixed or even stable in structure and meaning, evolves over time. Securely in place by 1790 and clearly evident in the Federalist papers, this new language of political experimentation was well suited to the rapidly changing, open ended circumstances of American life. More than that, it proved essential to the emergence of a democratic politics. As Howe shows, only when language came to be used for the continuing exploration of political truth, only when it served to further popular discussion of contested ideas, could the construction of a genuinely democratic dialogue proceed. By challenging the notion that the founders of the republic were fully confident about the clarity or permanence of their language, this book also has implications for the ongoing debate over the doctrine of "original intent." According to Howe, the framers understood the constitution to be the product of a hurried and contentious process, reflective of the limitations of human intellect and the imperfections of human language. They saw it, in short, as but an approximation of universal truth, an approximation that future generations were certain to improve.
AUTHOR BIOGRAPHY
John Howe is professor emeritus of history at the University of Minnesota.