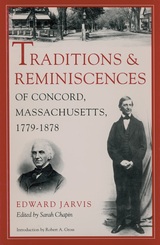 BUY
Traditions and Reminiscences of Concord, Massachusetts, 1779-1878
by Edward Jarvis
edited by Sarah Chapin
introduction by Robert A. Gross and Robert A. Gross
University of Massachusetts Press, 2009
Paper: 978-1-55849-766-5
A statistician and pioneer in the treatment of the mentally ill, Edward Jarvis (1803-1884) decided late in life to record his recollections of Concord, Massachusetts, the town in which he was raised. Using Lemuel Shattuck's History of Concord as the springboard for his thoughts, Jarvis produced a remarkable document. Traditions and Reminiscences is encyclopedic in scope but intimate in style; it provides an astonishingly detailed account of life in early nineteenth-century Concord. Jarvis escorts us through the family home, making certain we understand the function and value of each item in the domestic scene. Then he is off to the neighbors' houses, to the schoolhouse, the church, the social clubs, the library, the post office, the town hall, and even the tavern, where he unabashedly counts patrons' drinks. Along the way we learn about neighborly cooperation - quiltings, husking bees, and barn raisings - about social manners and respectability, and about local vices. The result is a vast storehouse of information and a vivid portrait of life in an early nineteenth-century preindustrial community. The memoir also provides a first-hand witness to the crusade for moral reform that transformed mid-nineteenth-century New England.