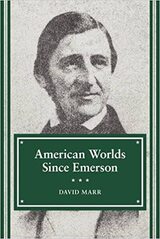 BUY
American Worlds Since Emerson
by David Marr
University of Massachusetts Press
Paper: 978-1-55849-769-6
Examining the relation between literature and American political life, David Marr proposes that the Emersonian tradition is so central to American culture that it can serve as a means of mapping the literary and intellectual history of the United States over the last 150 years. He shows how American literary genius and political thought have been concerned with the same family of problems all prompted by the Emersonian tradition of "idealized privatism," which so rejected the possibilities of political life that it has discourages the emergence of a public discourse and a political language. Marr shows that the decline of the political, the elusiveness of democracy, and the monumental influence of "idealized privatism" on its historiographers and critics are major themes of American literary thought and constitute a tradition that spans literature, criticism, history, philosophy, and political theory. He illustrates this through readings of Emerson's ideas of nature, culture, and politics; Walt Whitman's fantasy of the autocrat of letters; William James's critique of "vicious intellectualism;" the contrasting formulations of radical interiority in the poetry of Robinson Jeffers and the criticism of R. P. Blackmur; and two contemporary pictures of public discourse as revealed in Joseph Heller's Catch-22 and the essays of Ralph Ellison. Discussing not only the works of classic American thinkers, but also the recent writings of such new-pragmatists as Stanley Cavell, Richard Rorty, and Nelson Goodman, Marr calls for a reassessment of the American intellectual past and of contemporary assumptions about the relations of literature to political life.
AUTHOR BIOGRAPHY
David Marr teaches American studies and English at The Evergreen State College.