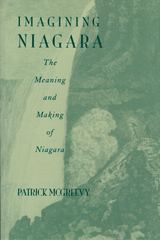 Imagining Niagara: The Meaning and Making of Niagara Falls
by Patrick McGreevy
University of Massachusetts Press, 2009
Paper: 978-1-55849-771-9
Niagara Falls was a lightning rod for nineteenth-century enthusiasms. Although travelers came to the falls to experience a place they considered outside the world of their ordinary lives, they brought with them their contemporary concerns. Many tourists were obsessed with the mysteries of death, others with scientific or religious speculation. The way they imagined Niagara Falls found expression in a torrent of writings and images that took a variety of forms.

Patrick McGreevy begins with the question, What can these visions of Niagara tell us about the place itself? The landscape surrounding the falls contains not only parks and religious shrines but also circuses, horror museums, and factories. People travel to Niagara not only to experience nature but also to celebrate marriages or commit suicide.
One way to make sense of these bizarre "human accumulations," as H. G. Wells called them, is to take seriously the Niagaras people have imagined. This book focuses on four interlocking themes that recur time and again in descriptions of the falls: Niagara as a thing imagined from afar, as a metaphor for death, as an embodiment of nature, and as a focus of future events. Using the skills of a cultural geographer, McGreevy discovers some surprising connections between the Niagara people have imagined and the one they made, between its natural grandeur and its industrial exploitation, between Frederick Law Olmsted's Reservation and the Love Canal.