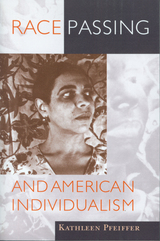 Race Passing and American Individualism
by Kathleen Pfeiffer
University of Massachusetts Press, 2009
Paper: 978-1-55849-784-9
In the literature of late nineteenth- and early twentieth-century America, black characters who pass for white embody a paradox. By virtue of the "one drop" rule that long governed the nation's race relations, they are legally black. Yet the color of their skin makes them visibly-and therefore socially-white.

In this book, Kathleen Pfeiffer explores the implications of this dilemma by analyzing its treatment in the fiction of six writers: William Dean Howells, Frances E. W. Harper, Jean Toomer, James Weldon Johnson, Jessie Fauset, and Nella Larsen. Although passing for white has sometimes been viewed as an expression of racial self-hatred or disloyalty, Pfeiffer argues that the literary evidence is much more ambiguous than that. Rather than indicating a denial of "blackness" or co-optation by the dominant white culture, passing can be viewed as a form of self-determination consistent with American individualism. In their desire to manipulate personal identity in order to achieve social acceptance and upward mobility, light-skinned blacks who pass for white are no different than those Americans who reinvent themselves in terms of class, religion, or family history.

In Pfeiffer's view, to see race passing as a problematic but potentially legitimate expression of individualism is to invite richer and more complex readings of a broad range of literary texts. More than that, it represents a challenge to the segregationist logic of the "one drop" rule and, as such, subverts the ideology of racial essentialism.
AUTHOR BIOGRAPHY
Kathleen Pfeiffer is associate professor of English at Oakland University.