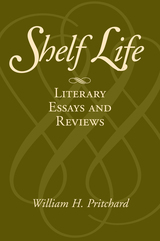 BUY
Shelf Life: Literary Essays and Reviews
by William Pritchard
University of Massachusetts Press
Paper: 978-1-55849-786-3
In this collection of essays and reviews, William H. Pritchard focuses on the work of English and American writers, most of them from the twentieth century. At a time when English studies in the academy seems increasingly impelled by historical and political concerns, Pritchard's aim is to reinstate the aesthetic as the major motive for literary study. Indeed "study" may be the wrong word for it, as the poet Philip Larkin made forcefully evident when he once snapped at an interviewer, "Oh, for Christ's sake one doesn't study poets. You read them and think, that's marvelous, how is it done, could I do it?" Pritchard is convinced that his job as a critic is to talk back to the imagination he has been engaged by. The four sections of this volume look at writers as diverse as the critic Samuel Johnson, the novelist Raymond Chandler, and the poet James Merrill, and at the abrasive epistolary behavior of Evelyn Waugh and Kingsley Amis. Perhaps the book's most original section is its final one, in which Pritchard writes about music-about playing the piano, singing hymns, listening to jazz-and about the teaching life as it appears in literature and in his own classroom. He concludes with appreciative essays on two of his own fondly remembered teachers. Shelf Life is mannerly and elegant, but venturesome, even bold in its explorations of the artistic performance-of that passionate preference Robert Frost found to be the root of all human expression.
AUTHOR BIOGRAPHY
William H. Pritchard is the Henry Clay Folger Professor of English at Amherst College, where he has taught for more than forty years. Among his many books are biographical critical studies of Robert Frost, Randall Jarrell, and John Updike.