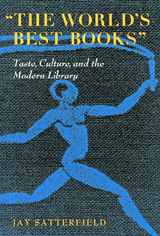 "The World's Best Books": Taste, Culture, and the Modern Library
by Jay Satterfield
University of Massachusetts Press, 2010
Paper: 978-1-55849-791-7
In October 1930, Macy's department store in New York City used the inexpensive book series "The Modern Library of the World's Best Books" as a loss-leader to draw customers into the store. Selling for only nine cents a copy, the small-format, modern classics attracted crowds of buyers. Businessmen, housewives, students, bohemian intellectuals, and others waited in long lines to purchase affordable hard-bound copies of works by the likes of Tolstoy, Wilde, Joyce, and Woolf. It was a significant moment in American cultural history, demonstrating that a series of books respected and praised by the nation's self-appointed arbiters of taste could attract a throng of middle-class consumers without damaging its reputation as a vehicle of "serious culture."

The Modern Library's reputation stands in sharp contrast to that of similar publishing ventures dismissed by critics as agents of "middlebrow culture," such as the Book of-the-Month Club. Writers for the New Republic, the Nation, and the Bookman expressed their fears that mass-production and new distribution schemes would commodify literature and deny the promise of American culture. Yet although the Modern Library offered the public a uniformly packaged, preselected set of "the World's Best Books," it earned the praise of these self-consciously intellectual critics.

Focusing on the Modern Library's marketing strategies, editorial decisions, and close attention to book design, Jay Satterfield explores the interwar cultural dynamics that allowed the publisher of the series to exploit the forces of mass production and treat books as commodities while still positioning the series as a revered cultural entity. So successful was this approach that the modern publishing colossus Random House was built on the reputation, methods, and profits of the Modern Library.
AUTHOR BIOGRAPHY
Jay Satterfield is Head of Reader Services at the Special Collections Research Center, University of Chicago Library.