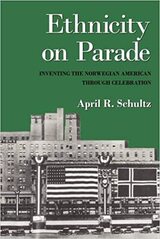 Ethnicity on Parade: Inventing the Norwegian American through Celebration
by April R. Schultz and April R. Schultz
University of Massachusetts Press, 2009
Paper: 978-1-55849-792-4
Why do people at certain historical moments choose to define themselves in terms of their ethnicity? What concrete concerns are embedded in such identification? What does the creation of this identity mean in the larger context of history and social relationships?
These are some of the questions April R. Schultz addresses in this interdisciplinary study of the way in which ethnic identity has been shaped and expressed in American culture. Drawing on the work of historians, anthropologists, literary critics, and cultural theorists, Schultz analyzes one national celebration—the 1925 Norwegian-American Immigration Centennial—as a strategic site for the invention of ethnicity. She shows how Norwegian Americans used this ceremony to create a distinctive vision of their past and present—a social and cultural construction that both accommodated and resisted dominant Anglo-American conceptions of assimilation.
By taking a close look at the experiences of a white, middle-class, Protestant ethnic community, this book challenges many assumptions about the "Americanization" of immigrant groups and offers new insight into the uses of historical memory.
AUTHOR BIOGRAPHY
April R. Schultz is professor of history and director of Women's Studies at Illinois Wesleyan University.