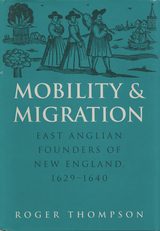 BUY
Mobility and Migration: East Anglian Founders of New England, 1629-1640
by Roger Thompson
University of Massachusetts Press, 2009
Paper: 978-1-55849-796-2
During the 1630s, more than 14,000 people sailed from Britain bound for New England, constituting what has come to be known as the Great Migration. This book offers the most extensive study of these emigrants ever undertaken. Focusing on 2,000 individuals who moved from the five counties of eastern England, it provides historians with important new findings on mobility, family life, kinship networks, and community cohesion." "Roger Thompson reveals the personal experiences and ancestral histories of the emigrants. He follows them across the Atlantic and investigates their lives and achievements in the New World. Distinguising between such groups as gentry, entrepreneurs, artisans, farmers, and servants, he explores whether the migration tended to be a solitary uprooting from a stable and predictable world of familiar neighborhoods or simply a longer move among many relocations." "Thompson also sheds light on the issue of motivation: Were these settlers pulled by the hope of eventual enrichment or of founding a purified society, or were they pushed by intolerance and persecution at home? Did they see New England as a haven of escape or an opportunity to exploit? Did New Englanders seek to replicate "English ways," preserving traditional culture and society, or did they embrace change and innovation? Mobility and Migration provides a wealth of new evidence for historians of both early modern England and colonial America.