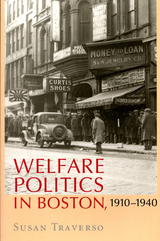 BUY
Welfare Politics in Boston, 1910-1940
by Susan Traverso
University of Massachusetts Press
Paper: 978-1-55849-798-6
Different conceptions of the purpose of charity and the role of the state have long been at the center of the debate over American welfare policy. Yet as Susan Traverso shows in this informative study of early twentieth-century Boston, ethnic, religious, and gender conflicts also have had a significant impact on welfare politics. Between 1910 and 1940, Boston's growing immigrant population repeatedly clashed with the city's traditional elite over how to provide assistance to the needy. While Yankee politicians and the leaders of Protestant charities argued that relief should be delivered by private organizations, Irish politicians and officials at Catholic and Jewish charities advocated extensive public welfare programs. Competing views of gender roles further complicated these disagreements. The campaign for widows' pensions, for example, won wide popular support even as public welfare programs that would primarily benefit men-such as unemployment insurance and old age assistance-failed to gain acceptance. In the 1920s, the debate over welfare shifted focus as prolonged periods of unemployment brought demands for aid to men who had lost their jobs, particularly those with families to support. Using the rhetoric of the Mothers' Aid campaign, Irish politicians broadened the idea of "acceptable dependency" to include men who needed jobs to provide for their own dependents. By lessening the stigma of male dependency on public welfare, these gendered arguments encouraged the expansion of public aid and set the stage for New Deal welfare programs of the 1930s. During that decade, Traverso contends, the idealized family headed by a male breadwinner became the basis for a shared vision of gender relations that mediated the political and ethnic debate over welfare policy.
AUTHOR BIOGRAPHY
Susan Traverso is assistant professor of history at North Central College in Naperville, Illinois.