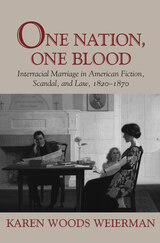 One Nation, One Blood: Interracial Marriage in American Fiction, Scandal, and Law, 1820-1870
by Karen Woods Weierman
University of Massachusetts Press, 2009
Paper: 978-1-55849-801-3
The proscription against interracial marriage was for many years a flashpoint in American culture. In One Nation, One Blood, Karen Woods Weierman explores this taboo by investigating the traditional link between marriage and property. Her research reveals that the opposition to intermarriage originated in large measure in the nineteenth-century desire for Indian land and African labor. Yet despite the white majority's overwhelming rejection of nonwhite peoples as marriage partners, citizens, and social equals, nineteenth-century reformers challenged the rule against intermarriage. Dismissing the new "race science" that purported to prove white superiority, reformers held fast to the religious notion of a common humanity and the republican rhetoric of freedom and equality, arguing that God made all people "of one blood."

The years from 1820 to 1870 marked a crucial period in the history of this prejudice. Tales of interracial marriage recounted in fiction, real-life scandals, and legal statutes figured prominently in public discussion of both slavery and the fate of Native Americans. In Part One of this book, Weierman focuses on Indian-white marriages during the 1820s, when Indian removal became a rallying cry for New England intellectuals.

In Part Two she shifts her attention to black-white marriages from the antebellum period through the early years of Reconstruction. In both cases she finds that the combination of a highly publicized intermarriage scandal, new legislation prohibiting interracial marriage, and fictional portrayals of the ills associated with such unions served to reinforce popular prejudice, justifying the displacement of Indians from their lands and upholding the system of slavery. Even after the demise of slavery, restrictions against intermarriage remained in place in many parts of the country long into the twentieth century. Not until the 1967 Loving v. Virginia decision did the Supreme Court finally rule that such laws were unconstitutional.