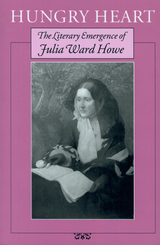 BUY
Hungry Heart: The Literary Emergence of Julia Ward Howe
by Gary Williams
University of Massachusetts Press
Paper: 978-1-55849-802-0
Hungry Heart reexamines the early literary career of Julia Ward Howe (1819–1910), best remembered as the author of "The Battle Hymn of the Republic." Combining biographical narrative with textual analysis, Gary Williams reconstructs Howe's emergence as a writer against the backdrop of her deeply troubled marriage to Boston philanthropist Samuel Gridley Howe. Among her early writings, Williams pays particular attention to Passion-Flowers, a celebrated yet controversial volume of poems published in 1854, as well as to an unpublished 400-page story that features a hermaphrodite as its protagonist. Williams shows how this latter work, startling in its bold exploration of sexual ambiguities, reflects Howe's effort to come to terms with her husband's intimate attachment to the prominent abolitionist Charles Sumner. The result is a fascinating cultural biography that not only enhances Howe's reputation as a writer but also enriches our understanding of the middle-class world of Victorian New England.
AUTHOR BIOGRAPHY
Gary Williams is professor of English at the University of Idaho.