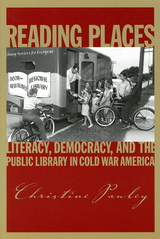 This book recounts the history of an experimental regional library service in the early 1950s, a story that has implications far beyond the two Wisconsin counties where it took place. Using interviews and library records, Christine Pawley reveals the choices of ordinary individual readers, showing how local cultures of reading interacted with formal institutions to implement an official literacy policy.

Central to the experiment were well-stocked bookmobiles that brought books to rural districts and the one-room schools that dotted the region. Three years after the project began, state officials and local librarians judged it an overwhelming success. Library circulation figures soared to two-and-a-half times their previous level. Over 90 percent of grade-school children in the rural schools used the bookmobile service, and their reading scores improved beyond expectation.

Despite these successes, however, local communities displayed deeply divided reactions. Some welcomed the book-mobiles and new library services wholeheartedly, valuing print and reading as essential to the exercise of democracy, and keen to widen educational opportunities for children growing up on hardscrabble farms where books and magazines were rare. Others feared the intrusion of govern- ment into their homes and communities, resented the tax increases that library services entailed, and complained about the subversive or immoral nature of some books.

Analyzing the history of tensions between various community groups, Pawley delineates the long-standing antagonisms arising from class, gender, and ethnic differences which contributed to a suspicion of official projects to expand education. Relating a seemingly small story of library policy, she teases out the complex interaction of reading, locality, and cultural difference. In so doing, she illuminates broader questions regarding libraries, literacy, and citizenship, reaching back to the nineteenth century and forward to the present day.
AUTHOR BIOGRAPHY
Christine Pawley is director of the School of Library and Information Studies at the University of Wisconsin–Madison and director of the Center for the History of Print Culture in Modern America. She is author of Reading on the Middle Border: The Culture of Print in Late-Nineteenth-Century Osage, Iowa, which won the Benjamin F. Shambaugh Award of the State Historical Society of Iowa.