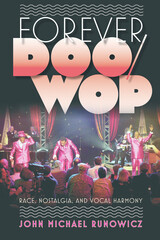 Music can be a storehouse for emotional, social, and cultural experiences that deepen and acquire greater value over time. This is a book about a particular genre of vocal harmony music called doo-wop that has accrued deep meaning and affective power among Americans since its inception in the aftermath of World War II. Although the first doo-wop singers were primarily young black males in major American cities, it wasn't long before white working-class teenagers began emulating their rhythm-and-blues harmonies. The racial exchange of this distinctive genre and the social bonding it engendered have had a significant and lasting impact on American musical culture.

In Forever Doo-Wop, John Runowicz traces the history of this music from its origins in nineteenth-century barbershop quartets through its emergence in the postwar era to its nostalgic adulthood from the mid-1960s to today. The book is based on interviews he has conducted and observations he has made over the last twenty-two years working as guitarist, musical director, and second tenor with one of the legendary doo-wop groups, the Cadillacs, on what is popularly known as the "oldies circuit." As a graduate student, he broadened his research to include the wider doo-wop community.

Forever Doo-Wop invites readers to gaze through a window on our society and culture where certain truths are revealed about how white and black Americans coexist and interact, about how popular music functions as a vehicle for nostalgia, and about the role of music making over a long lifetime.
AUTHOR BIOGRAPHY
John Michael Runowicz, who holds a PhD in ethnomusicology from New York University, is a professional musician and independent scholar.