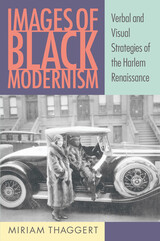 Focusing on the years from 1922 to 1938, this book revisits an important moment in black cultural history to explore how visual elements were used in poems, novels, and photography to undermine existing stereotypes. Miriam Thaggert identifies and analyzes an early form of black American modernism characterized by a heightened level of experimentation with visual and verbal techniques for narrating and representing blackness. The work of the writers and artists under discussion reflects the creative tension between the intangibility of some forms of black expression, such as spirituals, and the materiality of the body evoked by other representations of blackness, such as "Negro" dialect.

By paying special attention to the contributions of photographers and other visual artists who have not been discussed in previous accounts of black modernism, Thaggert expands the scope of our understanding of the Harlem Renaissance and contributes to a growing recognition of the importance of visual culture as a distinct element within, and not separate from, black literary studies.

Thaggert trains her critical eye on the work of James Weldon Johnson, Nella Larsen, George Schuyler, Carl Van Vechten, James Van Der Zee, and Aaron Siskind—artists who experimented with narrative and photographic techniques in order to alter the perception of black images and to question and reshape how one reads and sees the black body. Examining some of the more problematic authors and artists of black modernism, she challenges entrenched assumptions about black literary and visual representations of the early to mid twentieth century.

Thaggert concludes her study with a close look at the ways in which Harlem and the Harlem Renaissance were reimagined and memorialized in two notable texts—Wallace Thurman's 1932 satire Infants of the Spring and the Metropolitan Museum of Art's controversial 1969 exhibition "Harlem on My Mind: The Cultural Capital of Black America, 1900–1968."
AUTHOR BIOGRAPHY
Miriam Thaggert is assistant professor of English and African American studies at the University of Iowa.