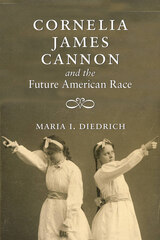 This biography examines the life of Cornelia James Cannon (1876-1969), a Radcliffe graduate, wife of a prominent Harvard professor, and mother of five who became a prolific writer and "all-purpose reformer," in the words of her son-in-law, Arthur Schlesinger Jr. In addition to writing eight novels, Cannon published dozens of essays during the 1920s and 1930s on a broad range of controversial topics. She advocated on behalf of women's rights, birth control, and public education and wrote provocative essays on immigration policy, welfare reform, and eugenics.

According to Maria I. Diedrich, it was the last of these concerns, Cannon's interest in what she and her husband called "the future of the race"—a term conflating ideas of class, race, and ethnicity—that inspired many of her varied reform activities. From the vantage point of today it may seem hard to understand how a social reformer and outspoken feminist could also embrace eugenicist principles. Yet, in the context of the time such views were not uncommon among progressive thinkers.

Far from being an extremist or even exceptional, Cornelia James Cannon was a woman representative of her social class and historical moment. By disentangling the threads of Cannon's life and thought, Diedrich seeks to shed light on the experiences of other progressive reformers of the interwar years whose interest in social justice often went hand in hand with racially exclusive notions of Americanness.
AUTHOR BIOGRAPHY
Maria I. Diedrich is professor of English and American studies at the University of Muenster. Her previous books include Love across Color Lines: Ottile Assingand Frederick Douglass and Black Columbiad: Defining Moments in African American Literature and Culture, coedited with Werner Sollors.