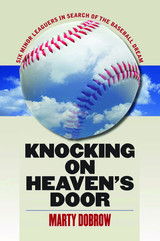 The rich slice of Americana found in minor league baseball presents a contradictory culture. On the one hand, the minors are filled with wholesome, family-friendly entertainment-fluffy mascots, kitschy promotions, and earnest young men signing autographs for wide-eyed Little Leaguers. On the other, they comprise a world of cutthroat competition in which a teammate's failure or injury can be the cause of quiet celebration and 90 percent of all players never play a single inning in the major leagues.

In Knocking on Heaven's Door, award-winning sportswriter Marty Dobrow examines this double-edged culture by chronicling the lives of six minor leaguers-Brad Baker, Doug Clark, Manny Delcarmen, Randy Ruiz, Matt Torra, and Charlie Zink-all struggling to make their way to "The Show." What links them together, aside from their common goal, is that they are all represented by the same team of agents-Jim and Lisa Masteralexis and their partner Steve McKelvey-whose own aspirations parallel those of the players they represent.

The story begins during spring training in 2005 and ends in the fall of 2008, followed by a brief epilogue that updates each player's fortunes through the 2009 season. Along the way Dobrow offers a revealing, intimate look at life in minor league baseball: the relentless tedium of its itinerant routines and daily rituals; the lure of performance-enhancing drugs as a means of gaining a competitive edge; the role of agents in negotiating each player's failures as well as his successes; and the influence of wives, girlfriends, and family members who have invested in the dream.
AUTHOR BIOGRAPHY
Marty Dobrow is associate professor of journalism at Springfield College. He writes regularly on sports for the Boston Globe and other publications, and four of his pieces have earned recognition in Houghton Mifflin's Best American Sports Writing series.
REVIEWS
-- Alexander Wolff, senior writer, Sports Illustrated and author of Big Game, Small World: A Basketball Adventure


-- NINE: A Journal of Baseball History and Culture

Part 3. The Second Half

Doug Clark steps out of a gray Ford Escort in the familiar parking lot at Springfield Central High School. It is Monday morning, September 12, and it is already steamy at 6:50 as he enters the building, his brain fuzzed with jet lag. He didn't get home until Saturday night, and after seven months out west, his body is protesting: C'mon, man, it's not even four o'clock. Still, he knows it's time to go to work. The days when major leaguers had to work an off- season job -- Pirates' third baseman Richie Hebner used to dig graves back in the 1970s -- are long gone. In 2005 the average big league salary climbed to $2.63 million, and even the minimum of $316,000 afforded an extremely comfortable lifestyle.

But for minor leaguers like Doug, off- season jobs remain a fact of life. For years he has been coming back to serve as a substitute teacher at his alma mater, and by now he is up to eighty bucks a day, pretty decent money by his standards. That is the equivalent of four full days of minor league meal money. True, he is no longer playing for proverbial peanuts, finally making something of a living wage from baseball at the age of twenty- nine. Qualifying for minor league free agency for the first time after the 2004 season, he re- signed with the Giants for $6,500 a month, from Opening Day until the final game. That meant he made $32,500 playing for the Fresno Grizzlies in 2005 -- more than twice what he had made in any of his seven previous minor league seasons. Still, the day after he got home he was on the phone with Dolores Crinella, the peppy seventy- two- year- old head secretary at Central High School, letting her know he was ready to go to work.

Granted, substitute teaching is not the top choice of off-season employment for most minor leaguers, particularly at an inner-city high school like Central. It is not an easy place. Regrettably situated less than a quartermile from the Smith and Wesson firearms plant, an ominous set of gray buildings ringed in razor wire, Central is Springfield's largest high school. The two thousand students bustle through gray halls lined with narrow maroon and orange lockers under jarring fl uorescent light. In a city with the highest violent crime rate in the state, one deemed the nineteenth most dangerous in America in a recent survey, the high school maintains a constant police presence: "Two when things are going well," says assistant principal Tad Tokarz. "Five when things are rocking."

There is not a feeling of menace in the school, but there is a premium placed on order. Teachers are asked to sign passes for students both before they go to the bathroom and once they return -- the extra disruption deemed worthwhile by the school administration. And if students are seen without a pass, they are approached by Tokarz or by teachers who have drawn the short straw of hall duty. Always the question is the same, always asked without irony: Where do you belong?

Doug is happy to be back. Central is connected with lots of good memories for him. In truth, it has been a formative place for all seven Clark kids. They were sharpened in the classroom, toughened on the athletic fields. Back in 1993, Doug had been the quarterback for the Golden Eagles when they went undefeated and won a Super Bowl, western Massachusetts style, an achievement that still mattered. The appeal of returning, though, has little to do with basking in past glory.

Teaching is in his blood. His mother, Peggy, taught third and fourth grade for years. Three of his six siblings teach in local schools. Eldest brother Will, his hair already flecked with gray at thirty- three, teaches science at the Van Sickle Middle School, a block and a half from the family homestead on Piedmont Street. Connell teaches math to middle schoolers just over the Connecticut border in Enfield. And here at Central, younger sister Molly has just started the week before as a special education teacher. Students accustomed to viewing substitutes as fair game quickly learn not to give Doug any guff. He knows what it's like to navigate the adolescent maelstrom at Central High. At six foot two and a rock-hard 207 pounds, he is also a commanding physical presence. His curly black hair, freckles, chiseled grin, and lively laughter make many a teenage girl's heart race. There is no denying Doug's twinkle, his easy confidence. The guys are impressed when they hear the news: their teacher is a professional athlete.

Doug enjoys the kids. He likes their vitality, their energy. He respects their fight. And in ways that transcend the cliché, he believes in what he is doing.

"I don't forget about the type of things you have to deal with at that age," he says. "It's not easy. You're still trying to figure out what you want and who you are."

Part of what he likes about the teaching, he admits, is the immersion in another world. Baseball can be so intense, so consuming. Yes, he loves the life, more so than most minor leaguers. He thrives on the challenge of the game, the daily competitiveness of it. Moreover, he truly enjoys taking in the new cities, the new adventures, the new women. Still, at season's end, he finds something refreshing about stepping into another realm. That has always been the case, but never more so than this year. This year he needs the distraction, the buffer from a disappointment that borders on heartbreak. Where do you belong? Yeah, this was home -- this would always be home -- but this year, surely, he belonged somewhere else. How could the Giants not see that? All year at Triple-A. A.316 average. Thirteen home runs. Thirty doubles. Twenty-nine stolen bases. What else, exactly, did he have to do?