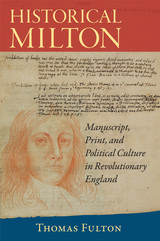 John Milton's Commonplace Book is the only known political notebook of a radical polemicist writing during the English civil war, and the most extensive manuscript record of reading we have from any major English poet from this period. In this rethinking of a surprisingly neglected body of evidence, Thomas Fulton explores Milton's reading practices and the ways he used this reading in his writing. Fulton's close study of the Commonplace Book suggests that this reading record is far from the haphazard collection of notes that it first appears but is instead a program of research which had its own ideology that responded to the reading habits and practices of Milton's contemporaries. Created mostly in the late 1630s and during the overthrow of the Stuart government in the 1640s, Milton's reading notes yield a number of surprises, the most fundamental being a highly structured commitment to political history. Fulton explores the relationship between the manuscript author and his polemical persona, placing the Commonplace Book, the manuscript "Digression" to the History of Britain, and some wartime poems in revealing contrast to the printed political texts of this period.
AUTHOR BIOGRAPHY
Thomas Fulton is associate professor of English at Rutgers University.