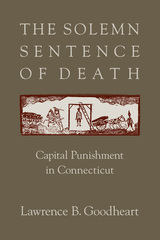 The first case study of its kind, this book addresses a broad range of questions about the rationale for and application of judicial execution in Connecticut since the seventeenth century. In addition to identifying the 158 people who have been put to death for crimes during the state's history, Lawrence Goodheart analyzes their social status in terms of sex, race, class, religion, and ethnicity. He looks at the circumstances of the crimes, the weapons that were used, and the victims. He reconstructs the history of Connecticut's capital laws, its changing rituals of execution, and the growing debate over the legitimacy of the death penalty itself. Although the focus is on the criminal justice system, the ethical values of New England culture form the larger context. Goodheart shows how a steady diminution in types of capital crimes, including witchcraft and sexual crimes, culminated in an emphasis on proportionate punishment during the Enlightenment and eventually led to a preference for imprisonment for all capital crimes except first-degree murder. Goodheart concludes by considering why Connecticut, despite its many statutory restrictions on capital punishment and lengthy appeals process, has been the only state in New England to have executed anyone since 1960.
AUTHOR BIOGRAPHY
Lawrence B. Goodheart is professor of history at the University of Connecticut, Hartford, and author of Mad Yankees:The Hartford Retreat for the Insane and Nineteenth-Century Psychiatry (University of Massachusetts Press, 2003).