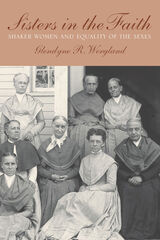 In 1788, following the death of charismatic founder Mother Ann Lee, the celibate religious group known as the Shakers set out to institutionalize equality of the sexes in their theology, government, and daily practice. In this book, Glendyne Wergland evaluates how well they succeeded in that mission by examining the experiences of women within Shaker communities over more than a century.

Drawing on an extensive archive of primary documents, Wergland discusses topics ranging from girlhood, health, and dress to why women joined the Shakers and how they were viewed by those outside their community. She analyzes the division of labor between men and women, showing that there was considerable cooperation and reciprocity in carrying out most tasks-from food production to laundering to gathering firewood-even as gendered conflicts remained.

In her conclusion, Wergland draws together all of these threads to show that Shaker communities achieved a remarkable degree of gender equality at a time when women elsewhere still suffered under the legal and social strictures of the traditional patriarchal order. In so doing, she argues, the experience of Shaker women served as a model for promoting women's rights in American political culture.
AUTHOR BIOGRAPHY
Glendyne R. Wergland is an independent scholar and author of One Shaker Life: Isaac Newton Youngs, 1793-1865 (University of Massachusetts Press, 2006).