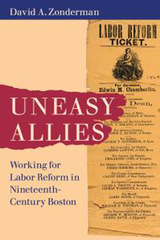 Throughout the nineteenth century, working-class activists and middle-class reformers in Boston strived to build alliances in the campaign for labor reform. Though some of these organizations have been familiar to historians for more than a century, this is the first study to trace these cross-class groups from their origins in the early 1830s to the dawn of the Progressive Era.

In addition to analyzing what motivated these workers and reformers to create cross-class organizations, David Zonderman examines the internal tactical debates and external political pressures that fractured them, even as new alliances were formed, and shows how these influences changed over time. He describes what workers and reformers learned about politics and social change within these complex and volatile alliances, and speculates as to whether those lessons have relevance for activists and reformers today.

What emerges from this investigation is a narrative of progress and decline that spans nearly three-quarters of a century, as an ever-shifting constellation of associations debated the meaning of labor reform and the best strategy to secure justice for workers. But the quest for ideological consistency and organizational coherence was not easily achieved. By century's end, not only did Boston look dramatically different from its antebellum ancestor, but its labor reform alliances had lost some of their earlier openhearted optimism and stubborn resilience.
AUTHOR BIOGRAPHY
David A. Zonderman is professor of history at North Carolina State University and author of Aspirations and Anxieties: New England Workers and the Mechanized Factory System, 1815-1850.