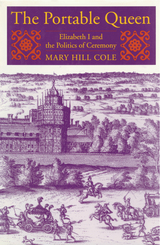 The Portable Queen: Elizabeth I and the Politics of Ceremony
by Mary Hill Cole
University of Massachusetts Press, 2011
Paper: 978-1-55849-867-9
Every spring and summer of her forty-four years as queen, Elizabeth I (1533–1603) insisted that her court go "on progress," a series of royal visits to towns and aristocratic homes in southern England. These trips provided the only direct contact most people had with a monarch who made popularity a cornerstone of her reign. Public appearances gave the queen a stage on which to interact with her subjects in a calculated effort to keep their support. The progresses were both emblematic of Elizabeth's rule and intrinsic to her ability to govern.

In this book, Mary Hill Cole provides a detailed analysis of the progresses. Drawing on royal household accounts, ministerial correspondence, county archives, corporation records, and family papers, she examines the effects of the visits on the queen's household and government, the individual and civic hosts, and the monarchy of the Virgin Queen.

Cole places the progresses in the sixteenth-century world of politics and images, where the queen and her hosts exchanged ceremonial messages that advanced their own agendas. The heart of the progresses was the blend of politics, socializing, and ceremony that enabled the queen to accomplish royal business on the move while satisfying the needs of those courtiers, townspeople, and country residents who welcomed her into their communities.

While all Renaissance monarchs engaged in occasional travel, in Elizabeth's case the progresses provided the settings in which she crafted her royal authority. Although the trips inconvenienced the government and strained her treasury, Elizabeth found power in the turmoil of an itinerant court and in a continuing ceremonial dialogue with her subjects.
AUTHOR BIOGRAPHY
Mary Hill Cole is professor of history at Mary Baldwin College.