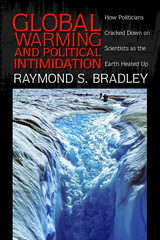 Global warming is the number one environmental issue of our time, yet some prominent politicians have refused to accept scientific evidence of human responsibility and have opposed any legislation or international agreement that would limit greenhouse gas emissions. A few have gone even further and have tried to destroy the reputations of scientists researching climate change by deliberately undermining the credibility of their research. These politicians have sought to sow seeds of doubt in the minds of the public and to weaken public and political support for the control of fossil fuel use.

In this powerful book, highly respected climate scientist Raymond Bradley provides the inside story from the front lines of the debate. In clear and direct language, he describes the tactics those in power have used to intimidate him and his colleagues part of a larger pattern of governmental suppression of scientific information, politics at the expense of empirically based discourse.

Speaking from his experience, Bradley exposes the fault lines in the global warming debate, while providing a concise primer on climate change. The result is a cautionary tale of how politics and science can become fatally intertwined.
AUTHOR BIOGRAPHY
RAYMOND S. BRADLEY is University Distinguished Professor in the Department of Geosciences and director of the Climate System Research Center at the University of Massachusetts Amherst. He is author of Paleoclimatology: Reconstructing Climates of the Quaternary, described by Quaternary Science Reviews as "an indispensable work of reference for scientists and students alike."
REVIEWS
-- Chris Mooney, author of Unscientific America: How Scientific Illiteracy Threatens Our Future


-- Naomi Oreskes, coauthor of Merchants of Doubt: How a Handful of Scientists Obscured the Truth on Issues from Tobacco Smoke to Global Warming


-- Bill McKibben, author of Earth: Making a Life on a Tough New Planet


-- The Yale Forum on Climate Change & the Media