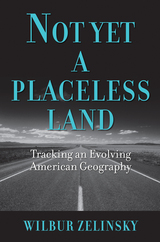 Today it is taken as a given that the United States has undergone a nationwide process of homogenization—that a country once rich in geographic and cultural diversity has subsided into a placeless sameness. The American population, after all, spends much of its time shopping or eating in look-alike chain or franchise operations, driving along featureless highways built to government specifications, sitting in anonymous airports, and sleeping in forgettable motels. In this book, cultural geographer Wilbur Zelinsky challenges that nearly universal view and reaches a paradoxical conclusion: that American land and society are becoming more uniform and more diverse at the same time. After recounting the many ways in which modern technologies, an advanced capitalist market system, and a potent central political establishment have standardized the built landscape of the country’s vast territory and its burgeoning population over the past two hundred and fifty years, he also considers the vigor of countervailing forces. In a carefully balanced assessment, he documents steady increases in the role of the unpredictable, in the number and variety of arbitrarily located places and activities, and the persistence of basic cultural diversities. Contrary to popular perceptions, place-to-place differences in spoken language, religion, and political behavior have not diminished or disappeared. In fact, Zelinsky shows, novel cultural regions and specialized cities have been emerging even as a latter-day version of regionalism and examples of neo-localism are taking root in many parts of the United States.
AUTHOR BIOGRAPHY
Wilbur Zelinsky is professor emeritus of geography at Penn State University. He is the author of numerous geographical studies of American society and culture, including his widely acclaimed book, The Cultural Geography of the United States.