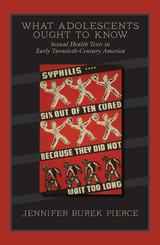 In 1901, Dr. Alfred Fournier committed an act both simple and revolutionary: he wrote ForOur Sons, When They Turn 18, a sexual and reproductive health treatise based on his clinical work at a leading Paris hospital. If this booklet aided adolescent understanding of health, it also encouraged reformers around the world to publish. By 1913, countless works on venereal disease prevention were available to adolescents.

During this period, authors wrestled with how to make still-developing scientific information available to a reader also in the process of maturing. What would convince a young person to avoid acting on desire? What norms should be employed in these arguments, when social and legal precedents warned against committing ideas about sex to print? How, in other words, could information about sex be made both decent and compelling? Health reformers struggled with these challenges as doctors' ability to diagnose diseases such as syphilis outpaced the production of medicines that could restore health. In this context, information represented the best and truest prophylactic. When publications were successful, from the perspective of information dissemination, they were translated and distributed worldwide.

What Adolescents Ought to Know explores the evolution of these printed materials—from a single tract, written by a medical researcher and given free to anyone, to a thriving commercial enterprise. It tells the story of how sex education moved from private conversation to purchased text in early twentieth-century America.
AUTHOR BIOGRAPHY
Jennifer Burek Pierce is assistant professor at the University of Iowa's School of Library and Information Science and author of Sex, Brains, and Video Games: A Librarian's Guide to Teens in the Twenty-first Century.